Worldcon 75 Art Show will bring together a unique and interesting combination of artists from around the world. From Finland, UK and Italy to Japan, USA, Russia and China, we will get to see great fantastical and sci-fi art in its many forms. Dragons and wizards along with spaceships and aliens and all kinds of other imaginative entities.

Important part of the art show is naturally Worldcon 75’s artist guest of honour Claire Wendling from France. Her delicate pencil work has been praised ever since she won the “Artist of the Future” prize at the Angoulême International Comics Festival in 1989. Her body of work ranges in genre from sword and sorcery to jungle animals and sexy pin-ups.

Below is a list of artists who have registered to the art show so far – and more are coming!

Petri Hiltunen is a Finnish cartoonist and illustrator whose work consists mostly of sci-fi, horror, fantasy and historical topics. Hiltunen has done dozens of comic book albums, graphic novels and book illustrations including characters as Conan, Elric, Tarzan and Peter Pan. He has done almost everything in the field of commercial art. Mostly he’s known for graphic novels and book illustrations, but they are only part of the story. He has also tried his hand in newspaper comics, cartoons, caricatures, commercials, storyboards, layouts, character design, schoolbook illustrations, tattoos, magazine illustrations, writing, lecturing and teaching. He has done cover paintings for books, CDs and games.

Clare is a craft magpie and makes jewellery using a wide variety of different techniques. 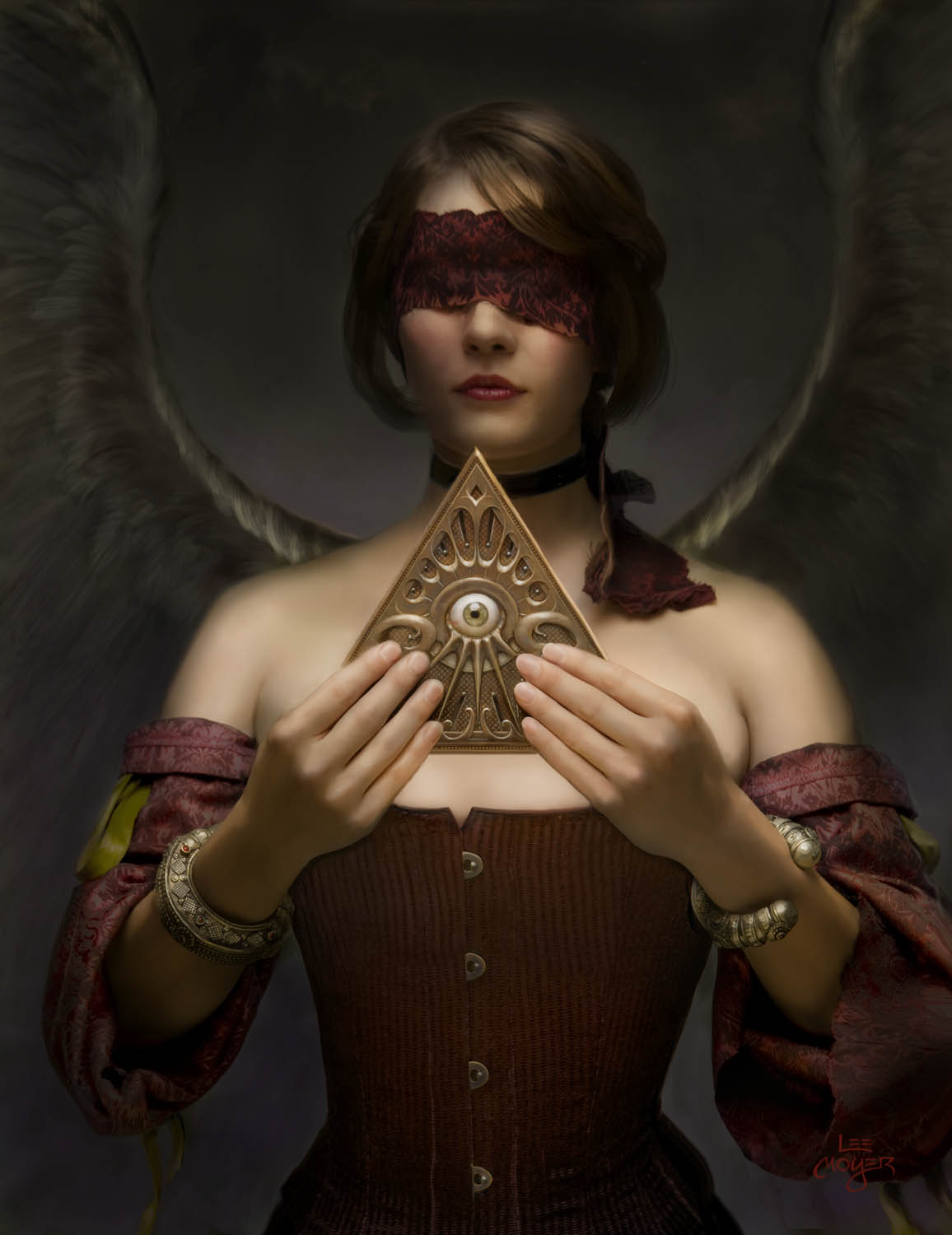 Art teacher by profession and artist in free time. Star gazing with eyes of imagination. 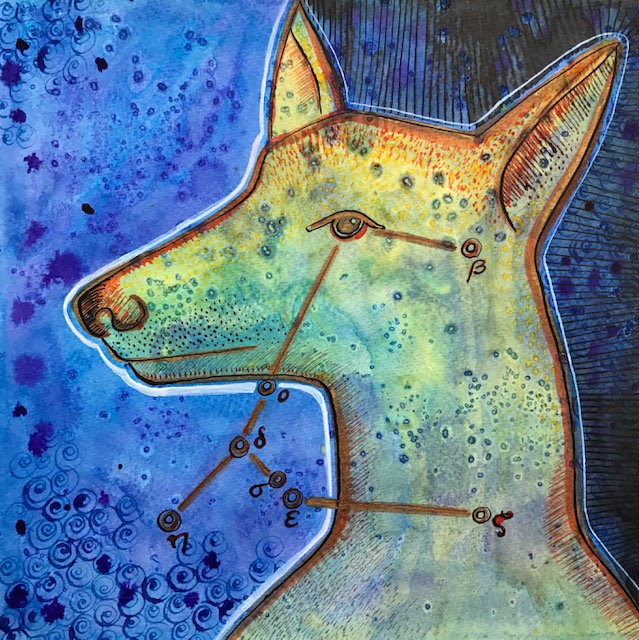 Illustrator. Born in 1968 in Aichi prefecture, Japan. She launched her career as a graphic designer in 1988, becoming a freelancer illustrator in 1991 and founding Togoru Company with her husband in 2000. Handles a wide range of genres including cover art and design for science fiction, mysteries and horror titles, as well as illustrations for children’s books. 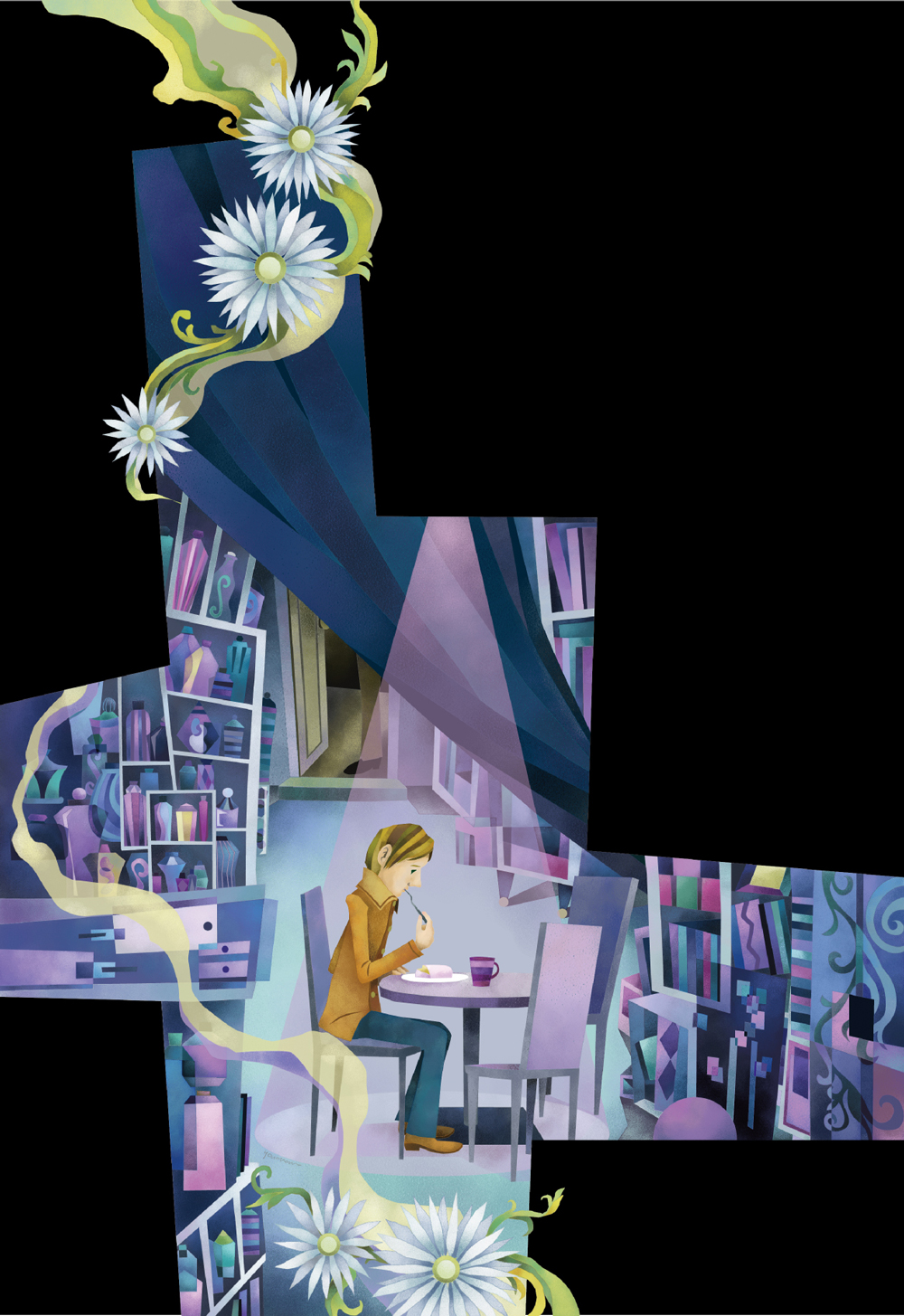 Spring Schoenhuth has a fascination for geology, particularly gemology, astronomy, and paleontology. She teaches second grade in California, while concurrently working on jewelry featuring golden age SF and popular culture. She’s the owner of Springtime Creations, purveyor of exotic and science fiction jewelry, whose work has been seen in Star Trek: DS9™. Spring designed the Campbell Award nominee pin, the Chesley Award winner pin, and is a five time Hugo Award Finalist for Best Fan Artist.

Pauline sculpts, knits, and creates jewelry. Her influences include Tim Burton, Monty Python, Edgar Allan Poe, and Roald Dahl. A second-generation fan, she tries to keep her work geeky, finding inspiration in nature, movies and TV, and her husband’s pre-coffee non-sequiturs. Disillusioned by the proliferation of resellers on Etsy, Pauline launched her own website in 2014. She will take special requests, within reason.

Rob started his fantasy art career with the website ‘colorsmith.com’ where, he sold prints of dragons, elves and wizards. This led to him being asked to do some paintings for the Robert Jordan Wheel of Time TCG, his first major job as a professional fantasy artist. For years, Rob has concentrated on illustrating for independent and small-press writers and musicians. In 2007, Rob began showing his work at Norwescon, and other sci-fi/ fantasy conventions, a tradition he continues with Worldcon today. 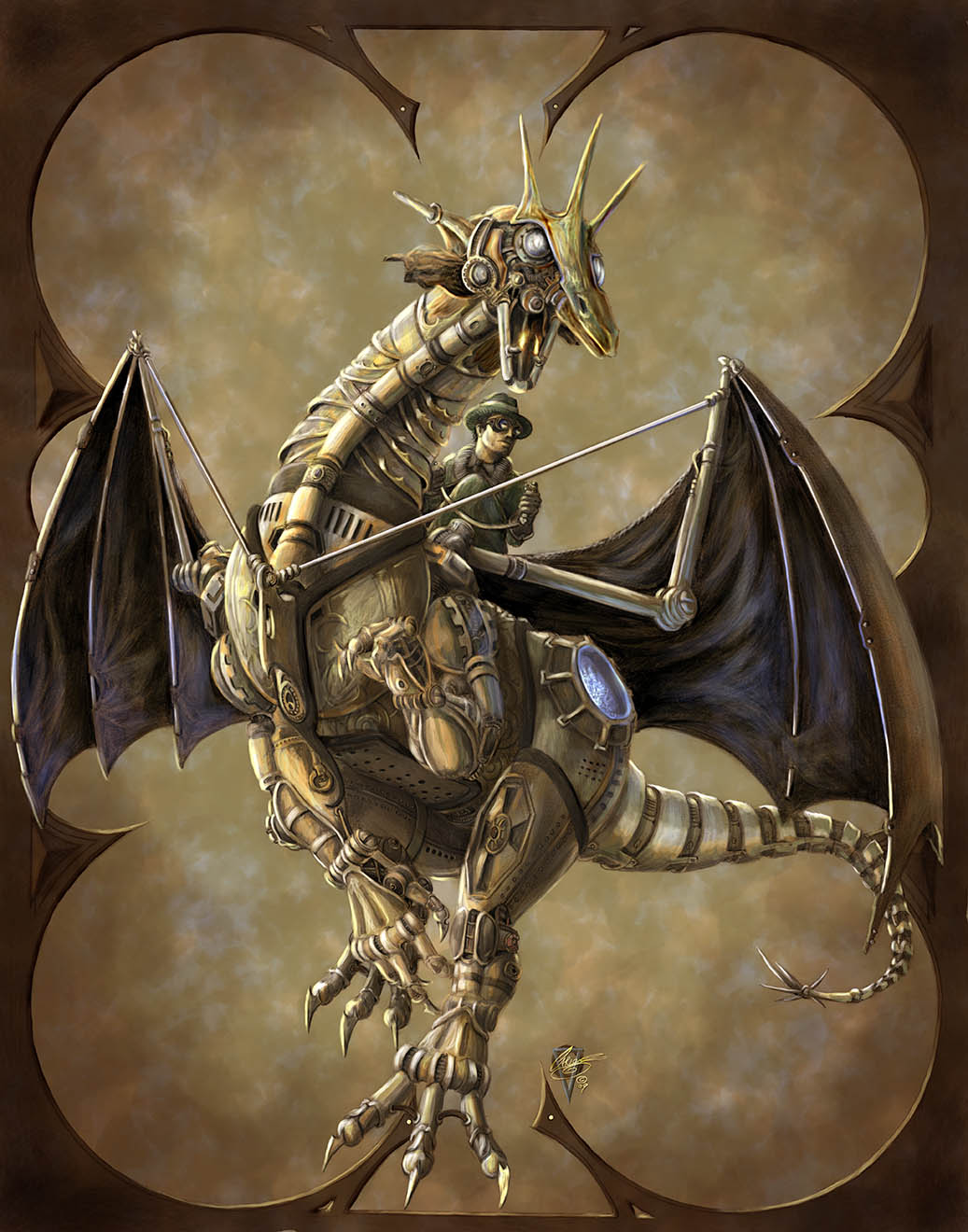 Maurizio Manzieri is a professional illustrator based in Turin (Italy) and teaches Digital Illustration at the Art Academy iMasterArt. His artwork has appeared on the covers of leading publishing houses and magazines such as Fantasy & Science Fiction, Asimov’s, Analog, MacMillan, Prime Books, PYR and Subterranean Press. During his career he has received the Europe Award, the Premio Italia (twice) and the Chesley Award conferred by ASFA, The Association of Science Fiction and Fantasy Artists. 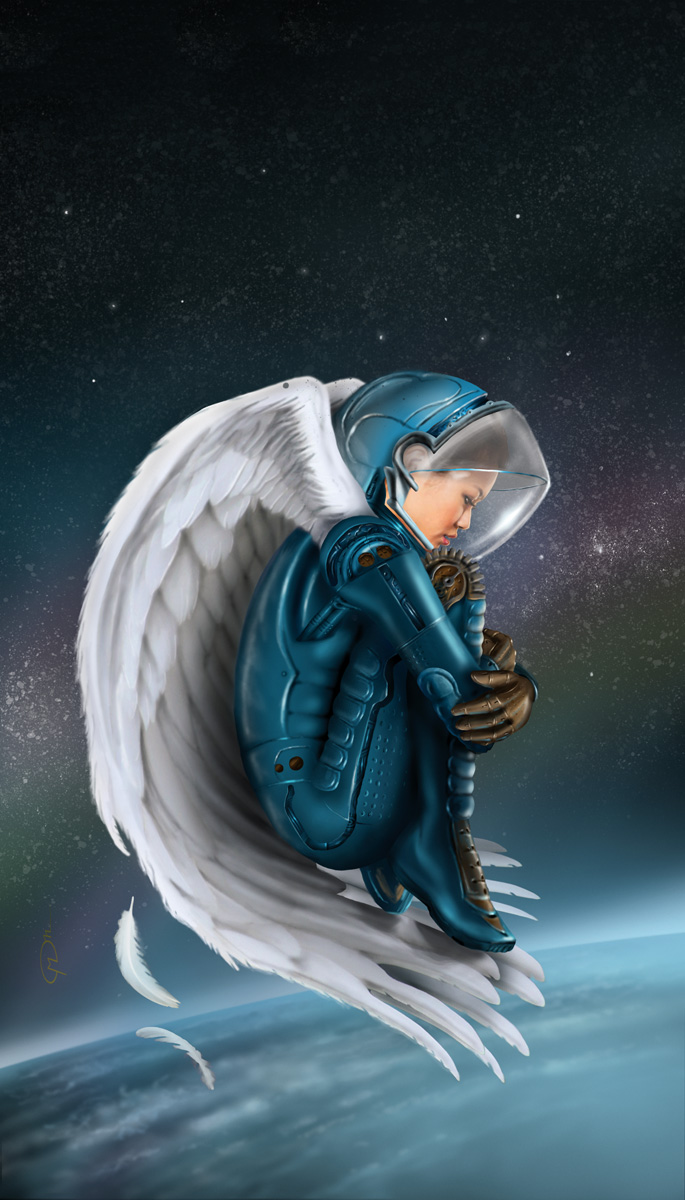 Haltijakäpälä: Ninavel the Ever Radiant

Paula Alavesa is an illustrator and artist from Oulu Finland. Her intrest in fantasy illustrations got kindled in youth when she began painting character portraits for fellow gamers. Now, she has years of experience in illustrating fantasy and sci-fi stories for friends, something she has being doing on the side while pursuing her academic career in games for urban environments. 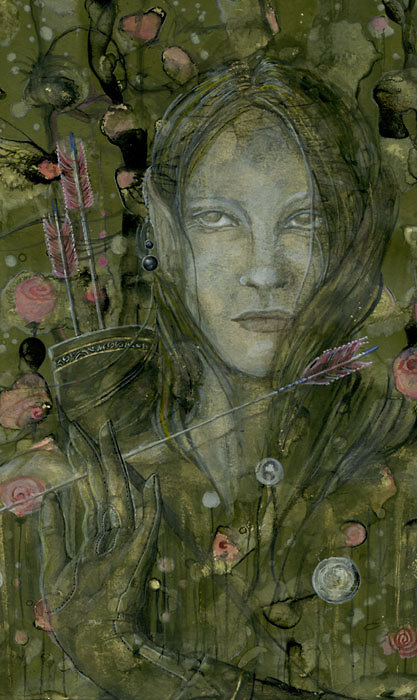 Kari is a mathematically inspired artist who works in several media. 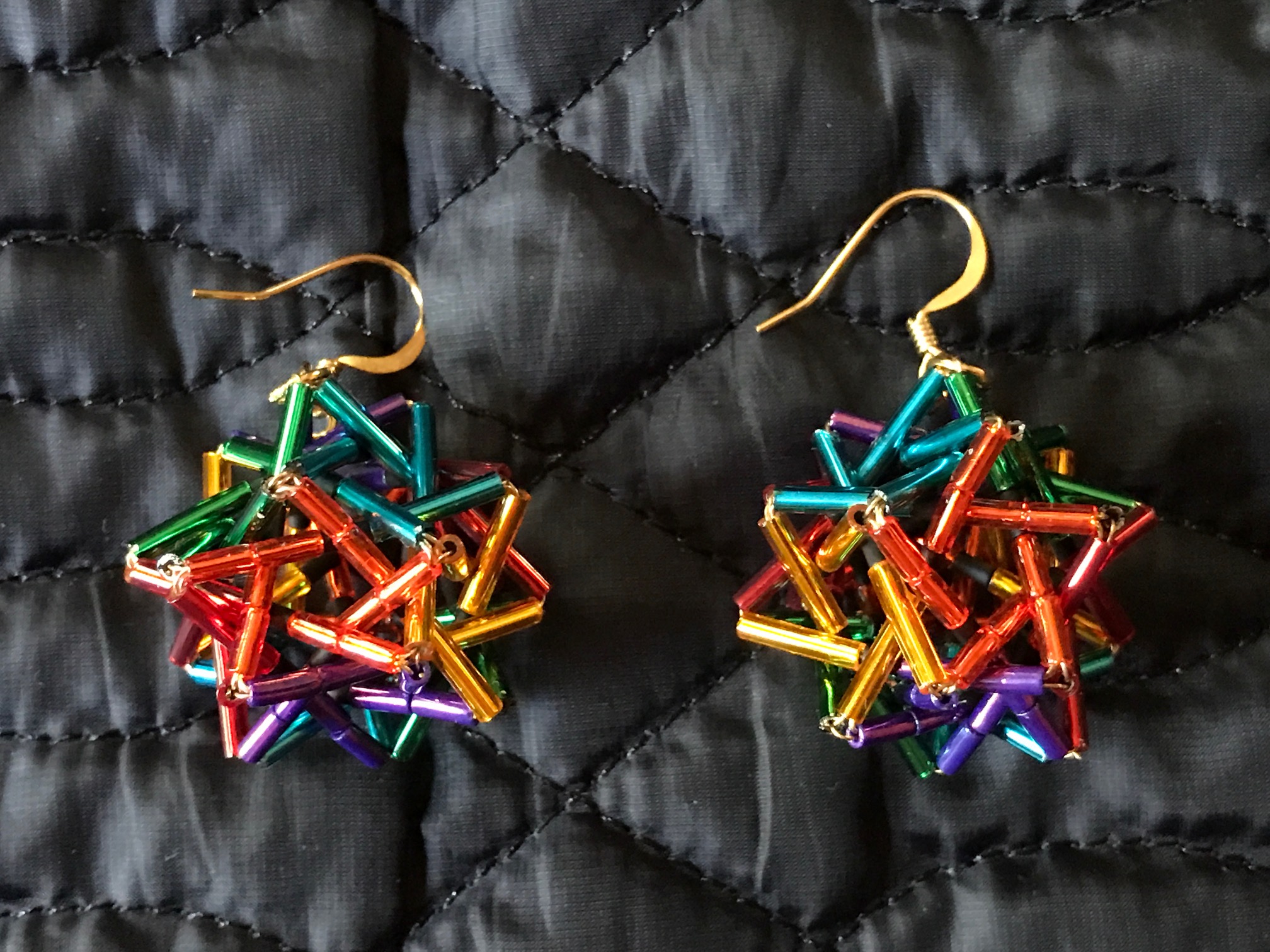 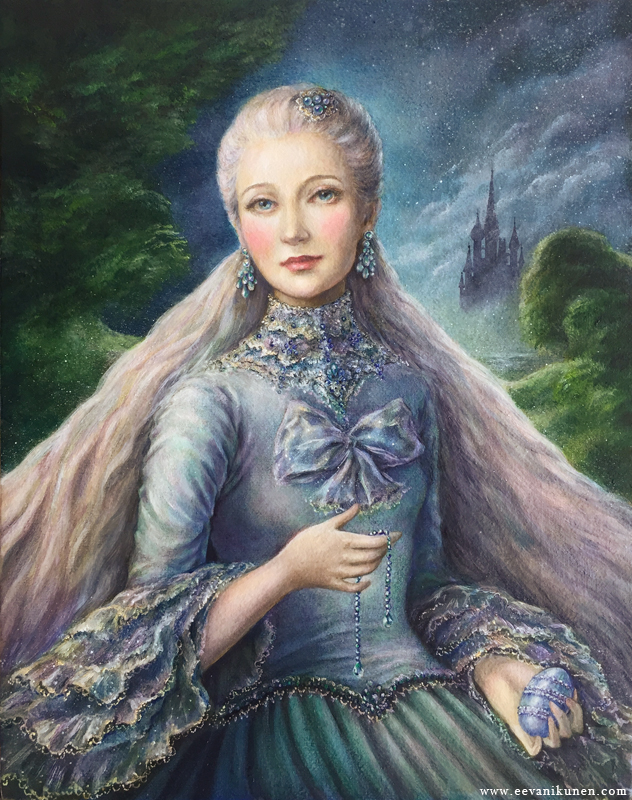 Floyd is a Norwegian contemporary artist, focusing on traditional mediums and specializing in vivid colors. He has a bachelors in fine arts from Kingston University London, and a background with tattooing. Currently he paints full time from a maker space in Oslo called Bitraf. Paintings are often connected to graffiti, street art, comic books and manga. By following and tutors it’s often referred to trashy pop art, or trashpop as he likes to call it.

The Crosspunk Wanderer is an independent art project established in 2015 by freelancer graphic designer, journalist and Master of Arts Lasse Paldanius, who currently lives in Rovaniemi, Finland, right next to the Arctic Circle. Artist’s imaginative digital paintings contain influences from the science fiction subgenres steampunk, cyberpunk and dystopia as well as visual references to Christian symbolism, Sami mythology, occultism, mysticism, Wild West romanticism, Middle Ages and other historical eras. The artworks are portraits of cyborgs, robots and other kind of wanderers inside science fantasies where philosophy, science, religion and entertainment can encounter in many different ways. 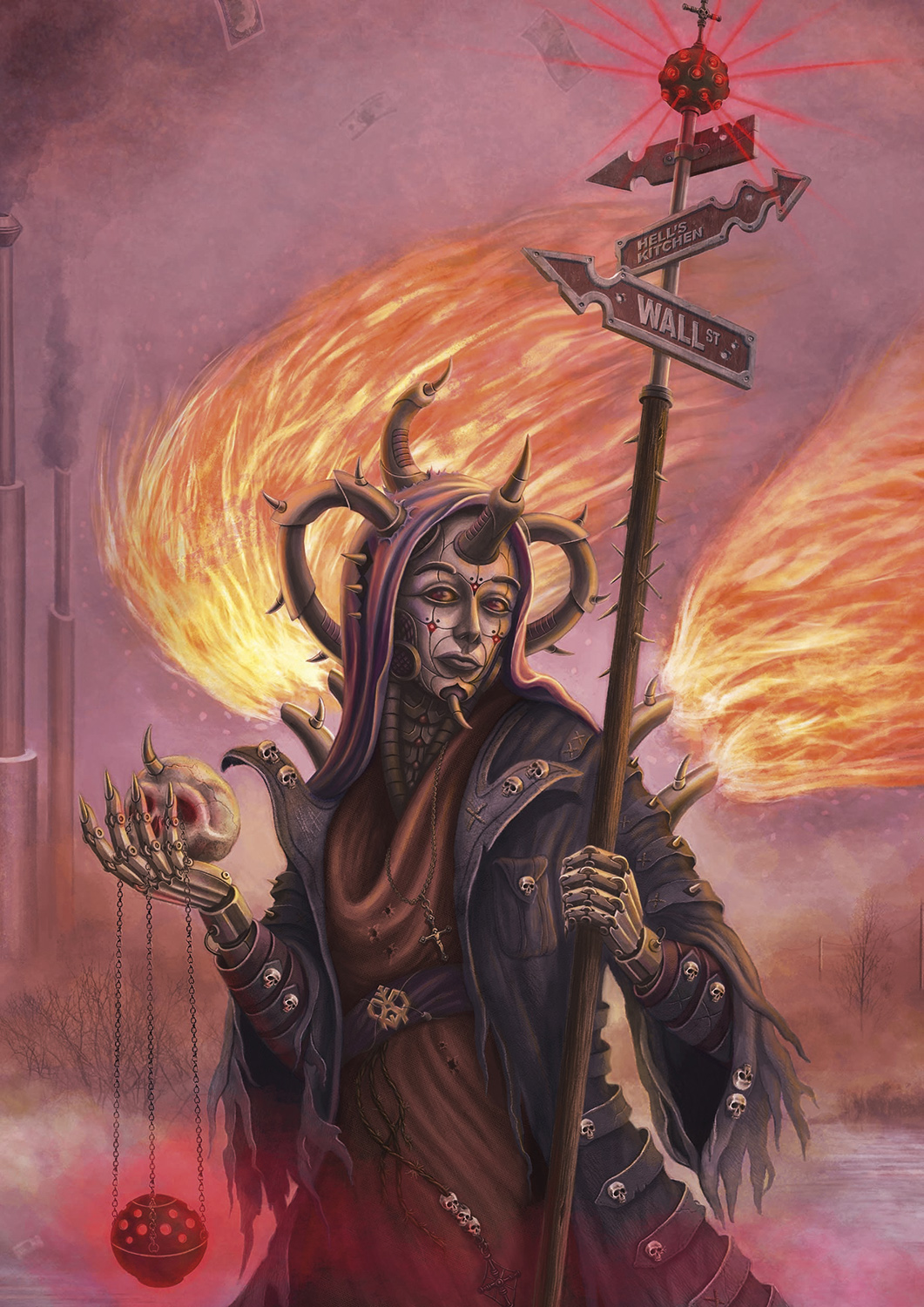 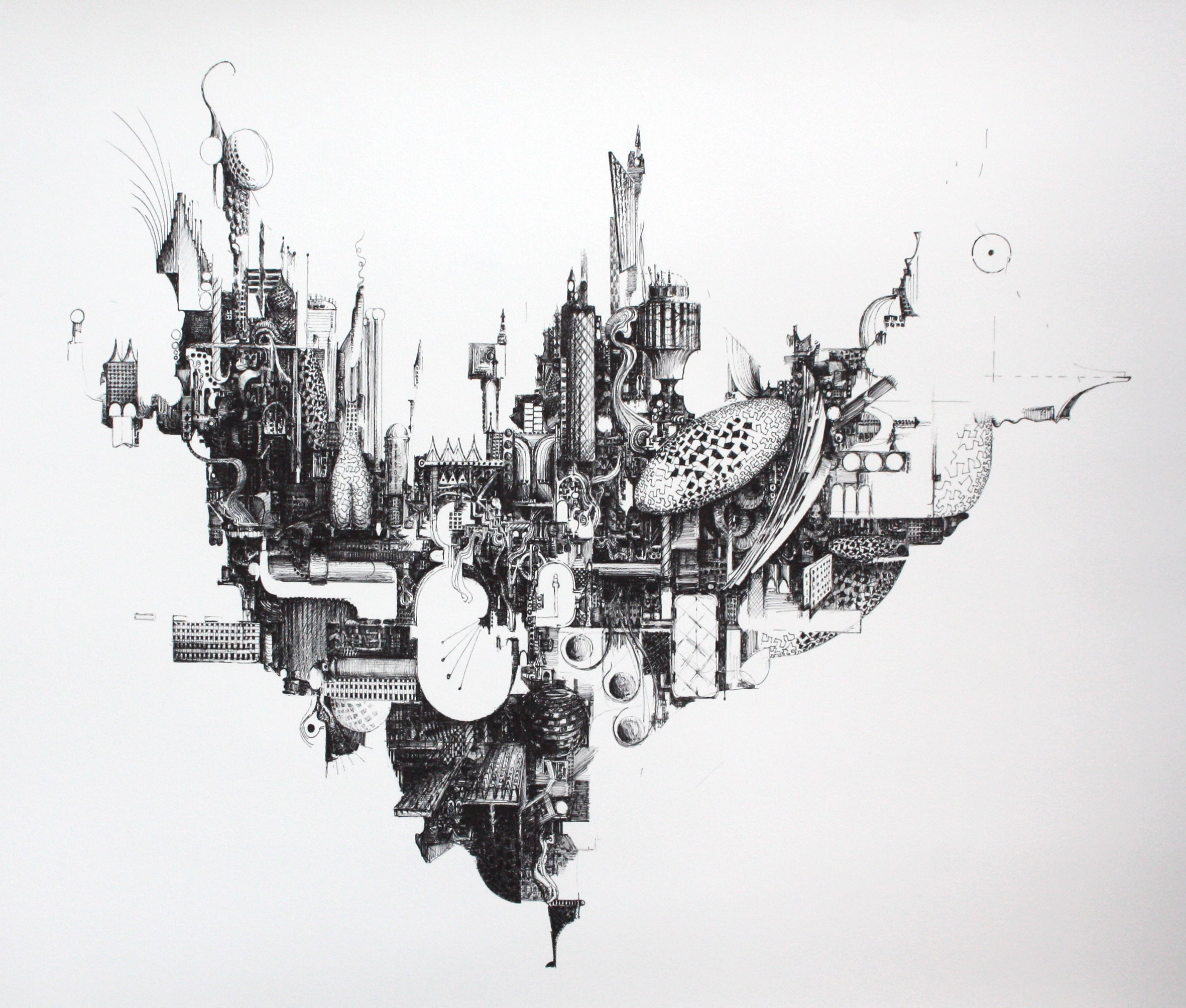 Dexter Fabi is an artist from Chicago, U.S., centered on the arts of the fantastic and has been exhibited in numerous art shows in New York City and the Chicagoland area, winning awards for his work. He loves to bring the speculative into the tangible by creating work that delights the viewer. He loves to read and travel, loves music and writing poetry, and is also a full-time tutor, a caretaker of feral cats, a silent film connoisseur, and is often found in museums looking at the precious artifacts and relics of the human record. He is available for commissions in steampunk jewelry, tiny planet construction of terran cities, calligraphy, drawing, and oil painting. He can be reached at dexter101 {at} hotmail {dot} com. 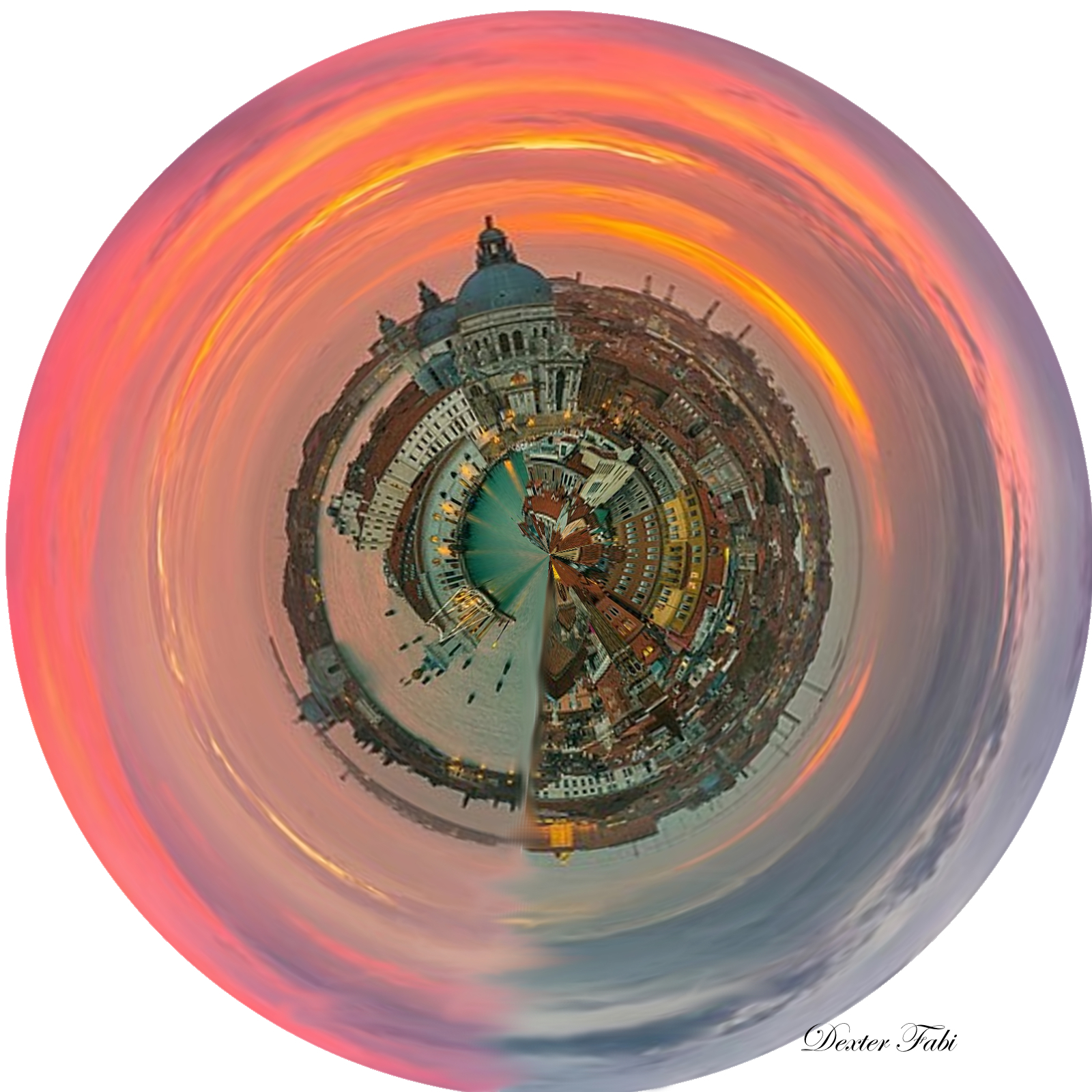 Part of my work for over the years.You can see my art style, and my interest through my web site. 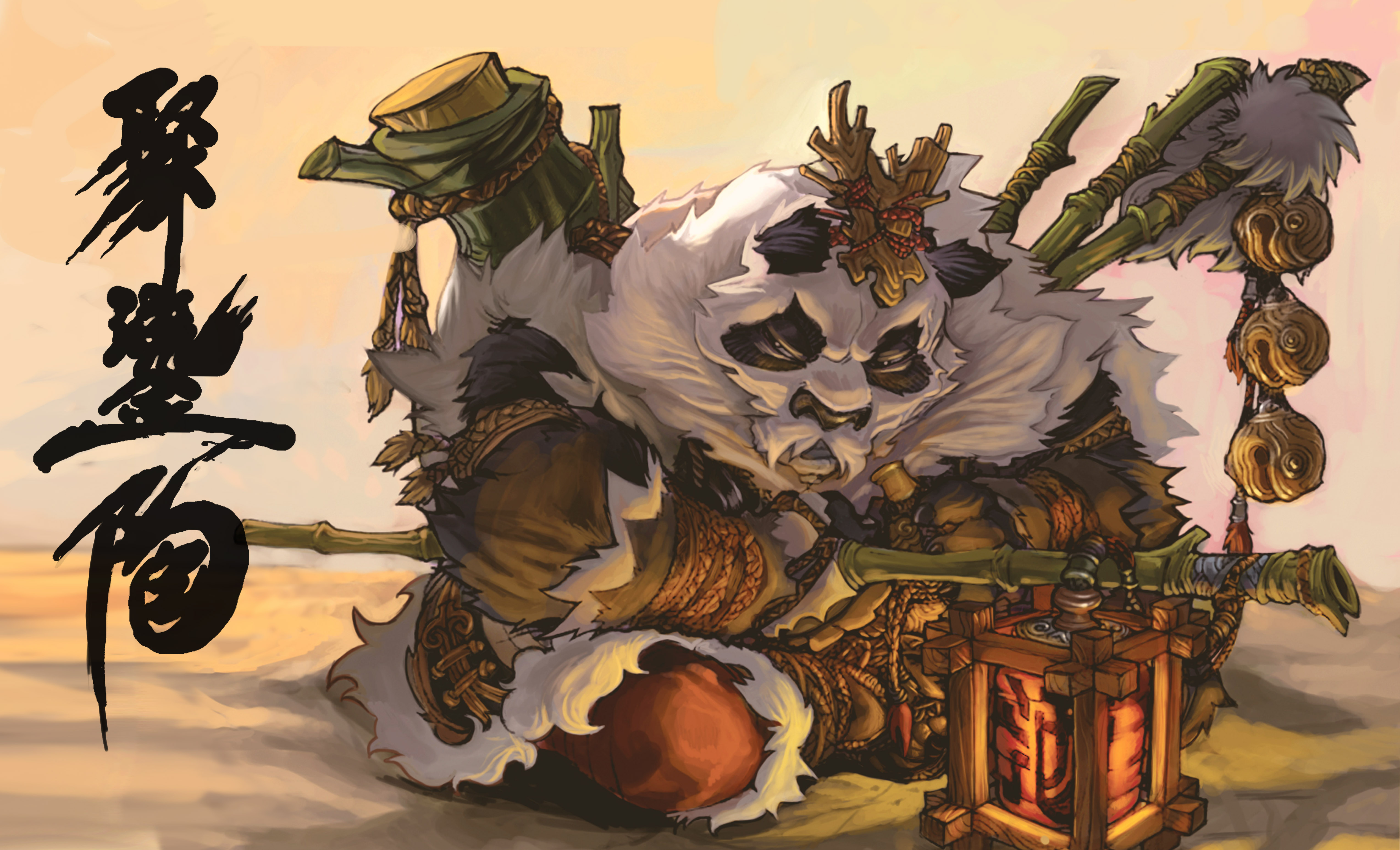 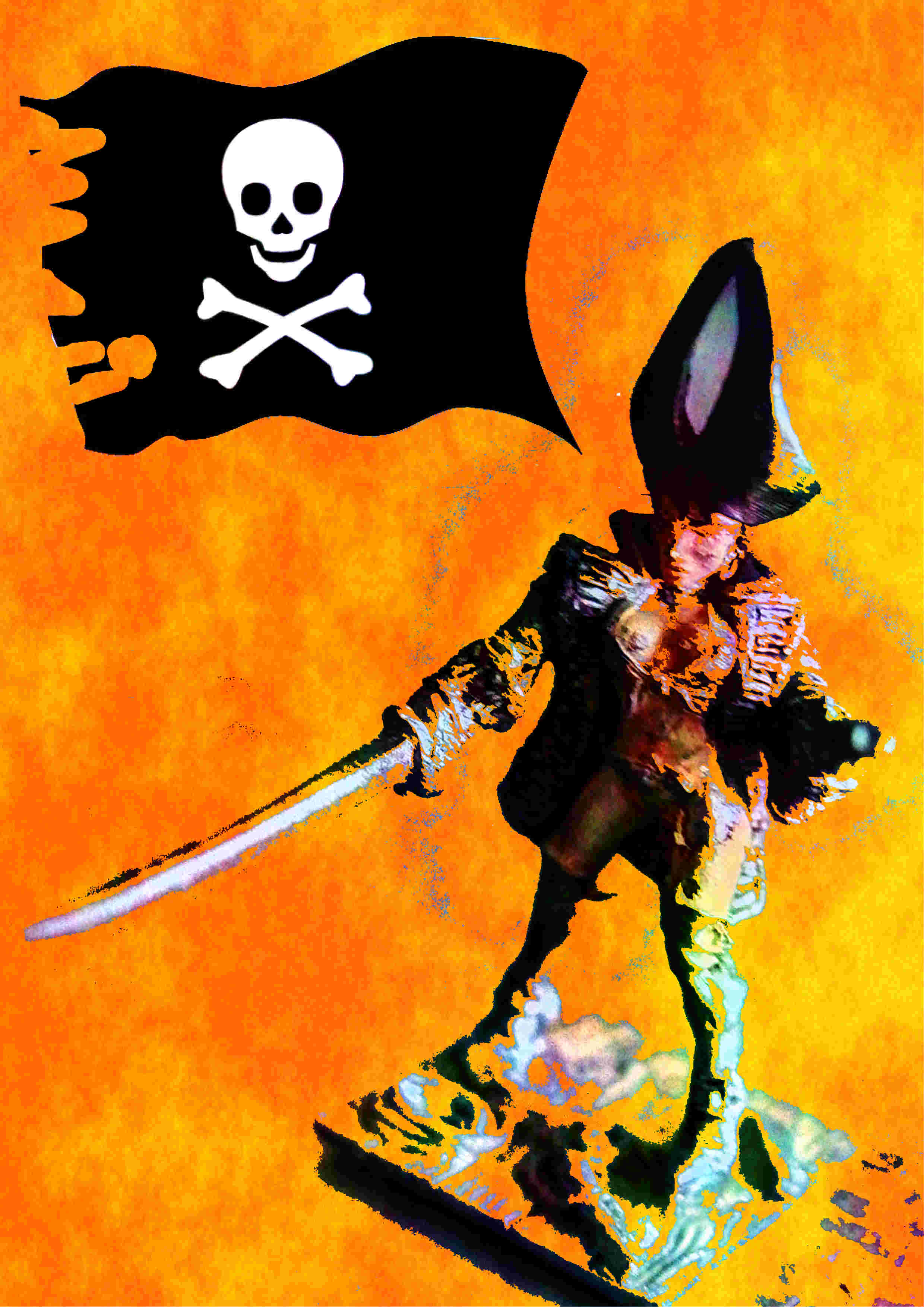 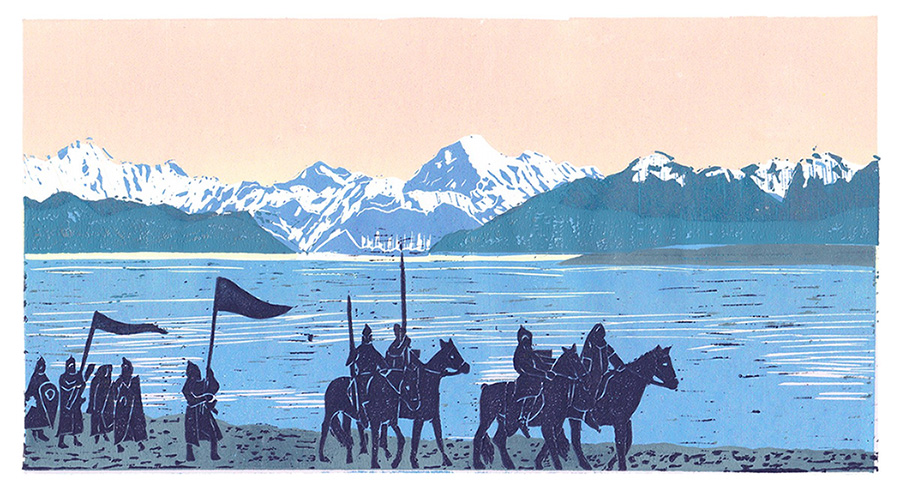 Oil and digital works of dragons and fantastical landscapes. 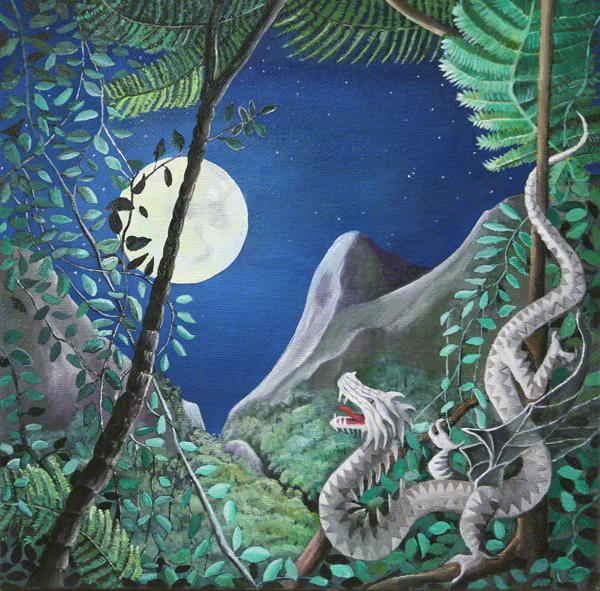 Maine illustrator and printmaker with an interest in imagined worlds, compelling characters, and sense of place. 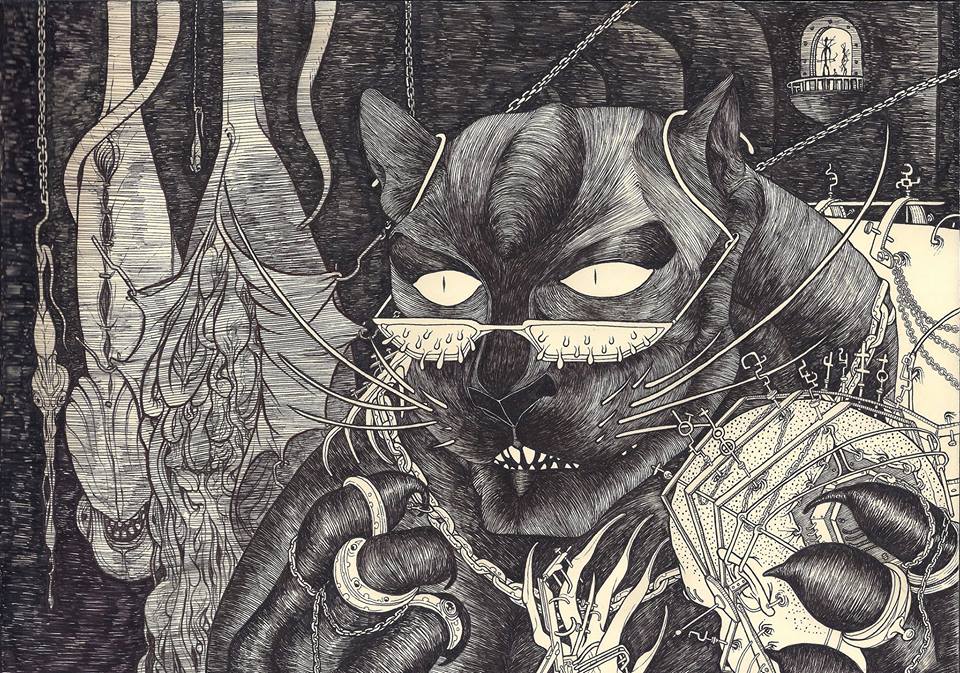 I retired long ago from the superhero trade, but in my glory days I once saved the entire Solar System from a mad scientist who had been plotting to blow up the Sun. She’s on Prison now, but I still have her wacky contraption out in my garage, and on some mornings (usually before I’ve had my first cup of coffee) I feel an almost irresistible urge to go out there and push the danged button. Fortunately, my art studio is also in my garage, and I’m easily distracted. 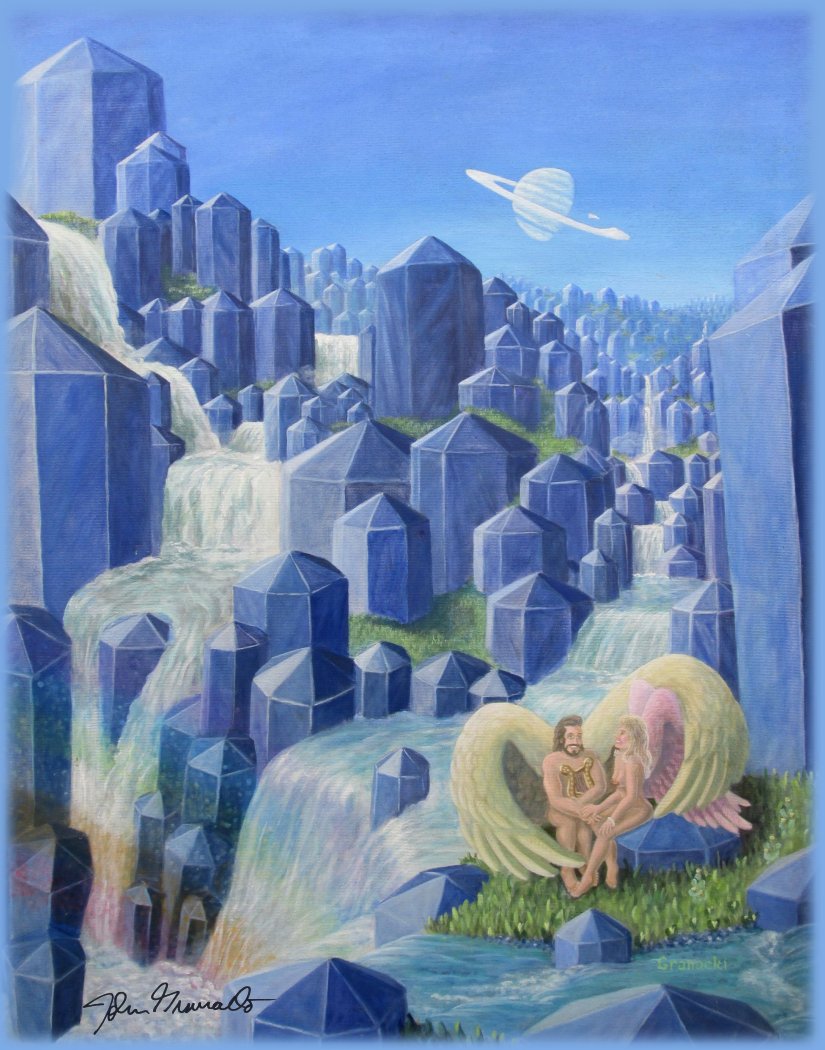 I find my inspiration in the vivid moments I imagine: the unicorns, the dark figures and everything else are glimpses into a story I haven’t yet told fully. 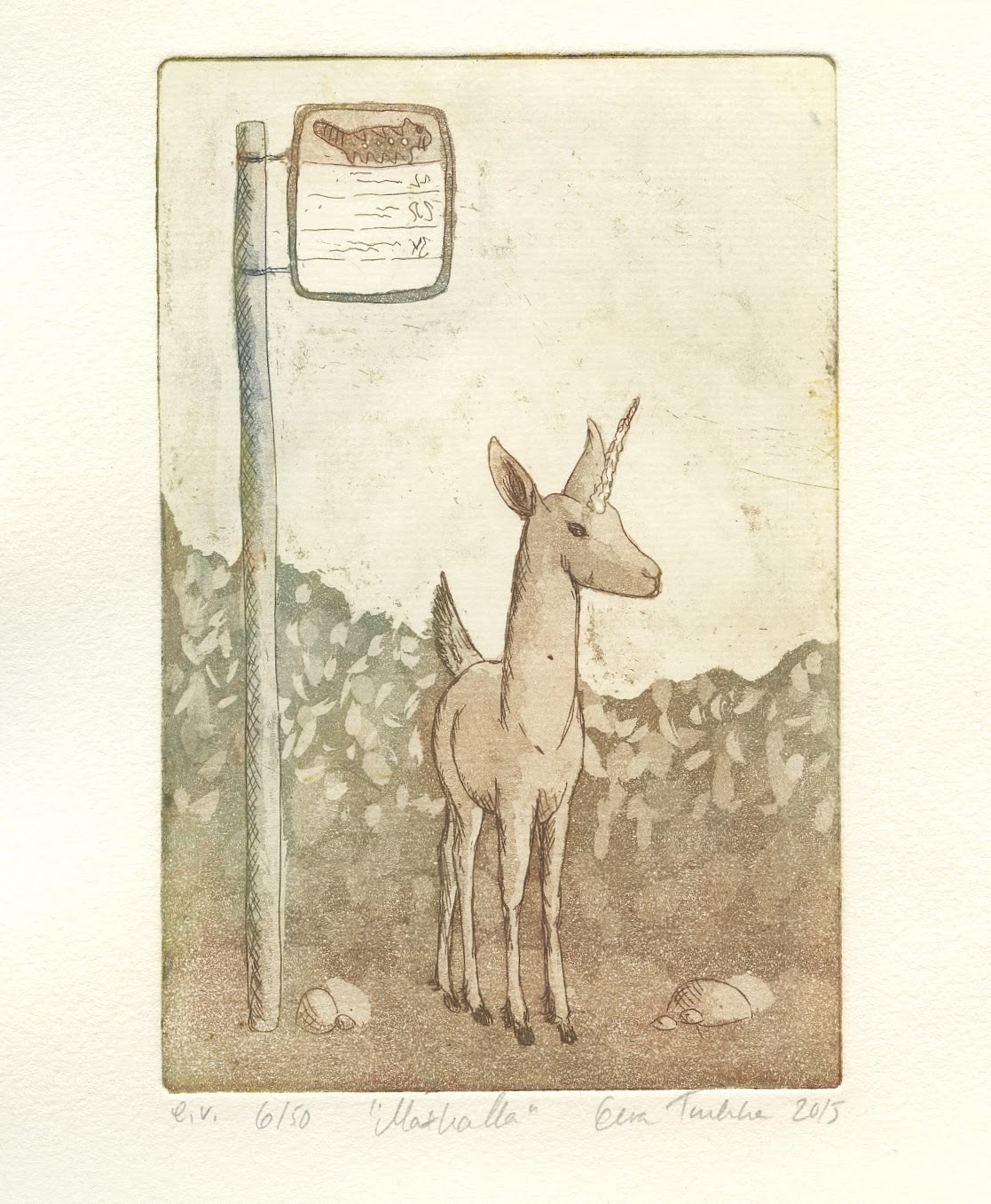 Sci-fi & fantasy illustrator. Based in Stockholm and coming from a background as a retouch artist.

I see myself as a craftsman philosopher, who creates, organizes and presents fragments of the world. I use my art to humbly map out the universe and human consciousness. I borrow unscrupulously from different fields of study, such as medicine, mineralogy and mathematics. Currently I’m in love with making pixel graphics via methods of oldschool printmaking, thus building bridges between digital perfection and the analog nature of the human touch. 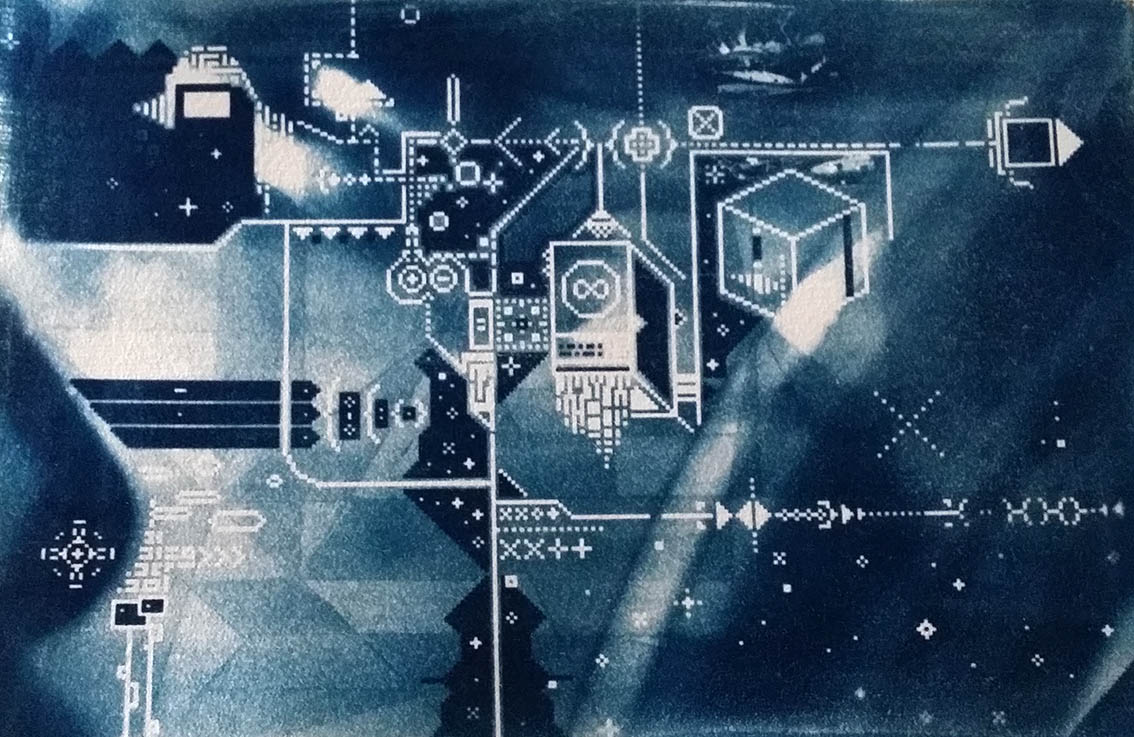 Cherry is the front woman and visual artist behind Studio Killers an audiovisual band from the internet. 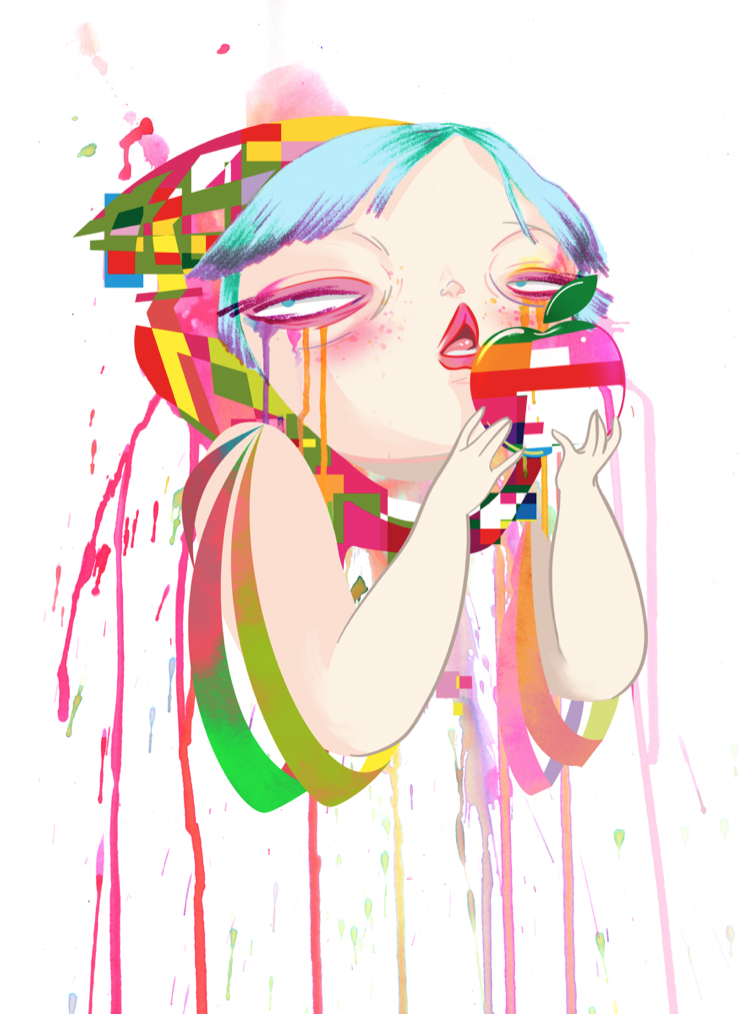 This artist is a member of the “Three-Body Artist Group”. Other members are Yuan LIU, Kedong LIANG, Xiaoyu ZHANG, and Xiaodong XU. 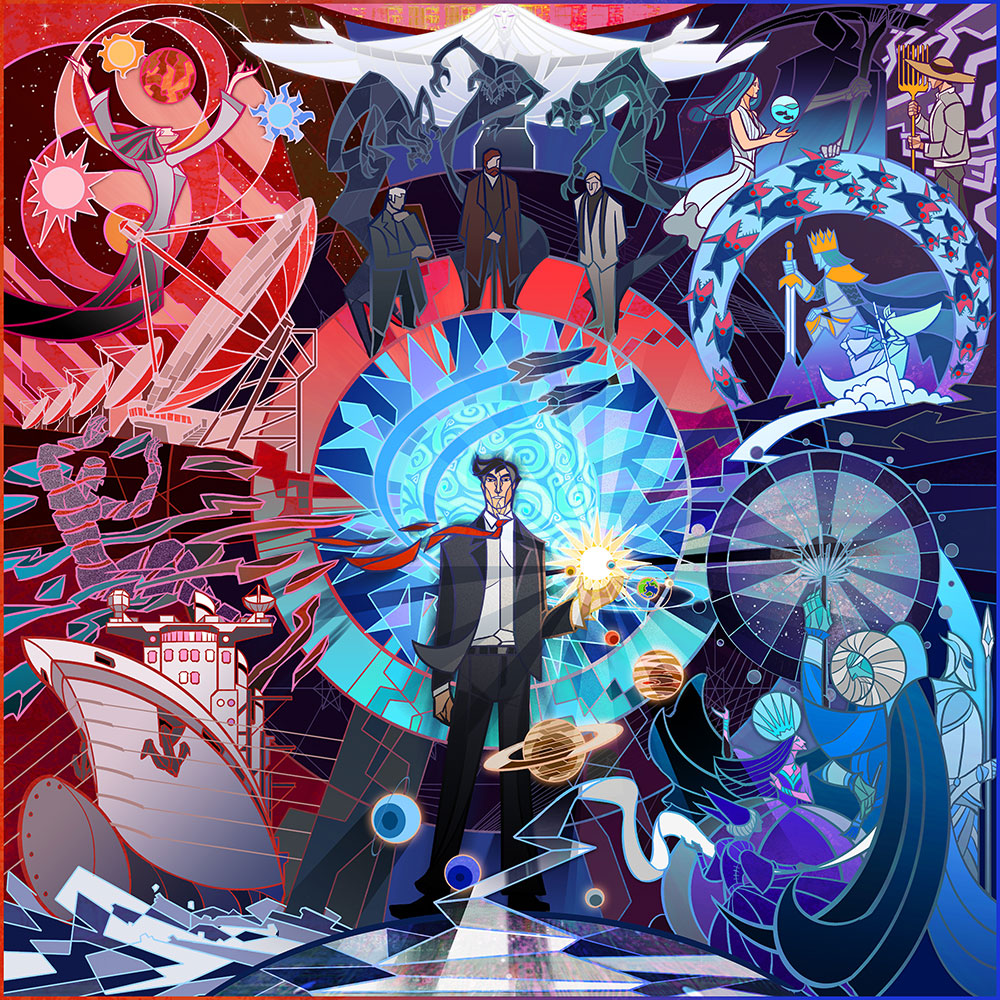 Jian Guo: The Man Who Holds the Future

This artist is a member of the “Three-Body Artist Group”. Other members are Yuan LIU, Kedong LIANG, Jian GUO, and Xiaodong XU. 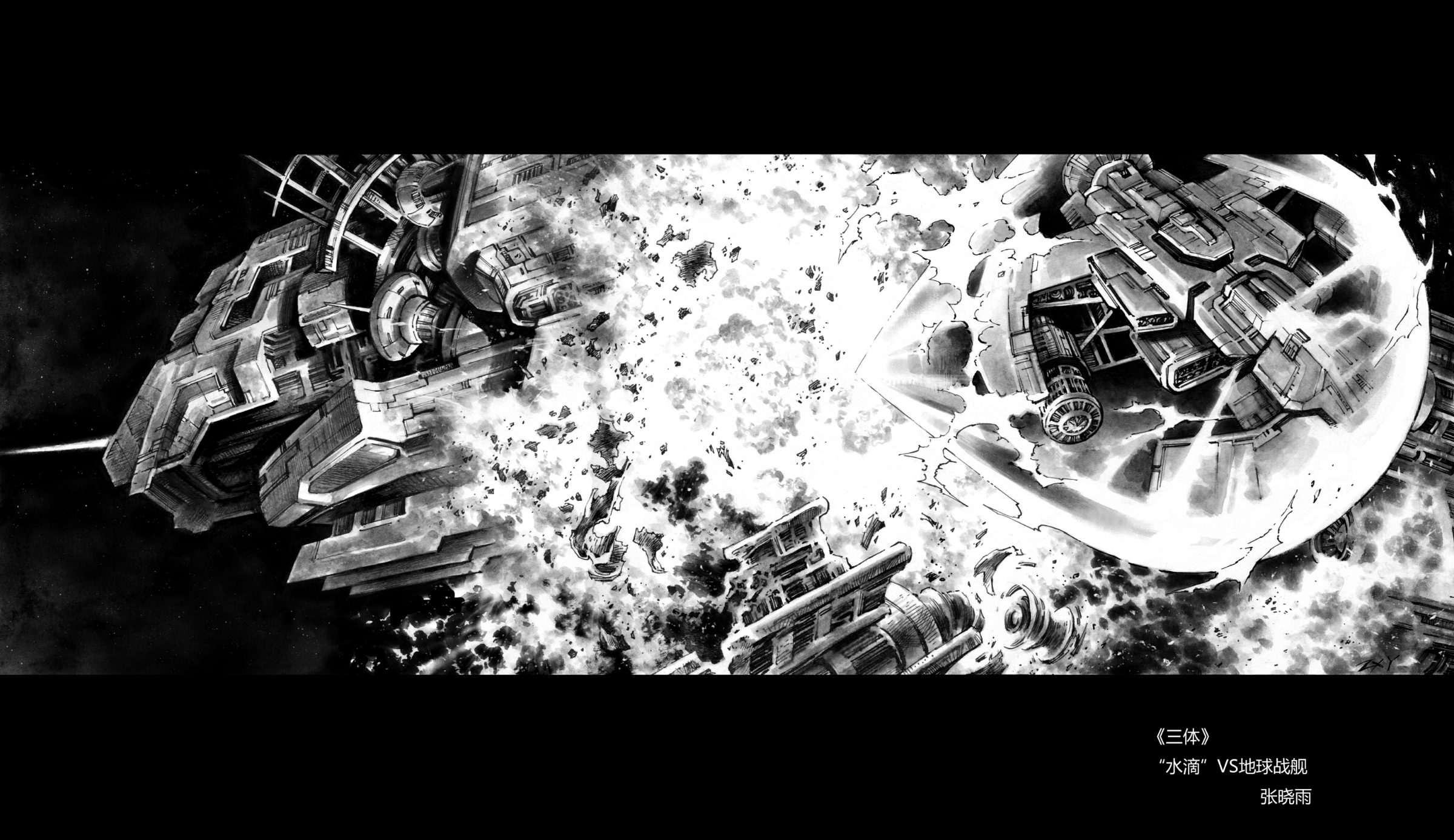 Xiaoyu Zhang: The Three-Body: Droplet vs the Space Fleet

This artist is a member of the “Three-Body Artist Group”. Other members are Yuan LIU, Kedong LIANG, Xiaoyu ZHANG, and Jian GUO. 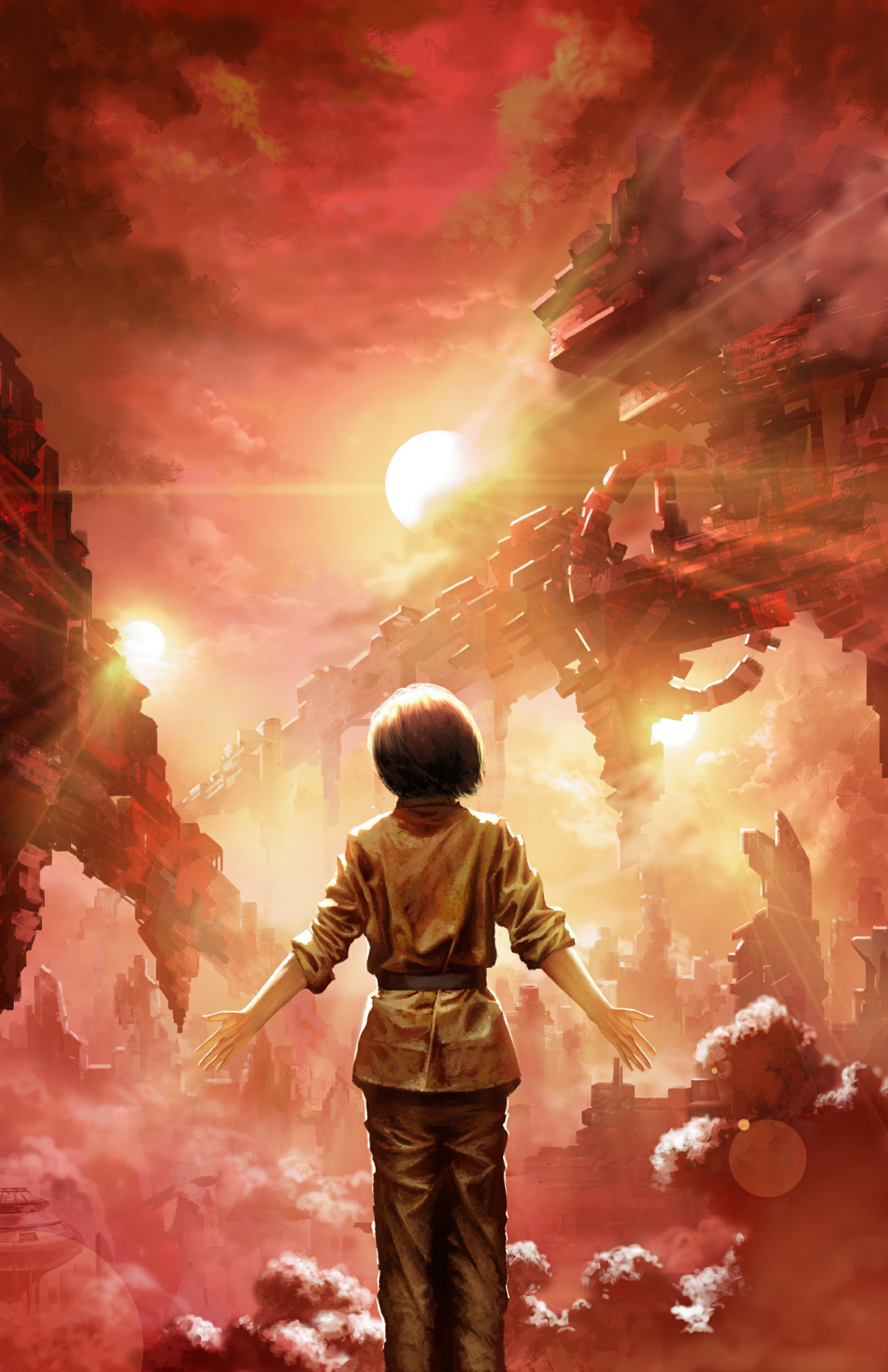 This artist is a member of the “Three-Body Artist Group”. Other members are Xiaodong XU, Kedong LIANG, Xiaoyu ZHANG, and Jian GUO. 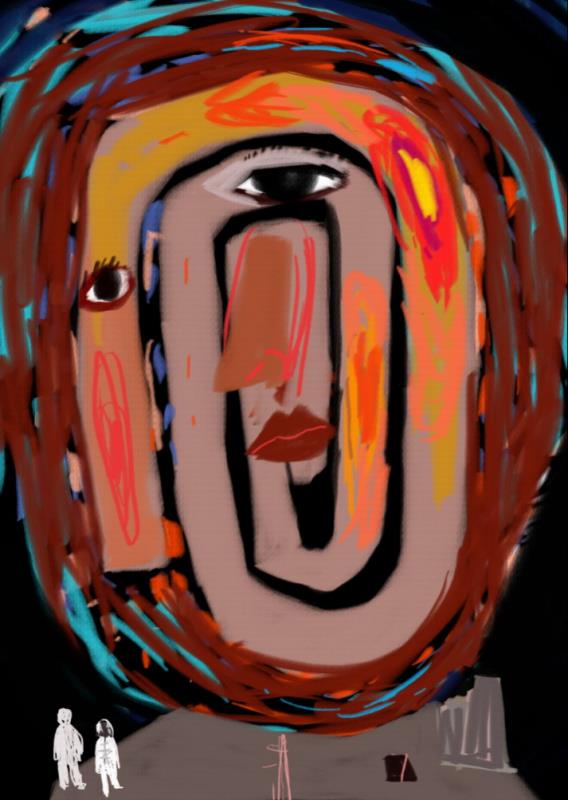 This artist is a member of the “Three-Body Artist Group”. Other members are Yuan LIU, Xiaoyu ZHANG, Jian GUO, and Xiaodong XU. 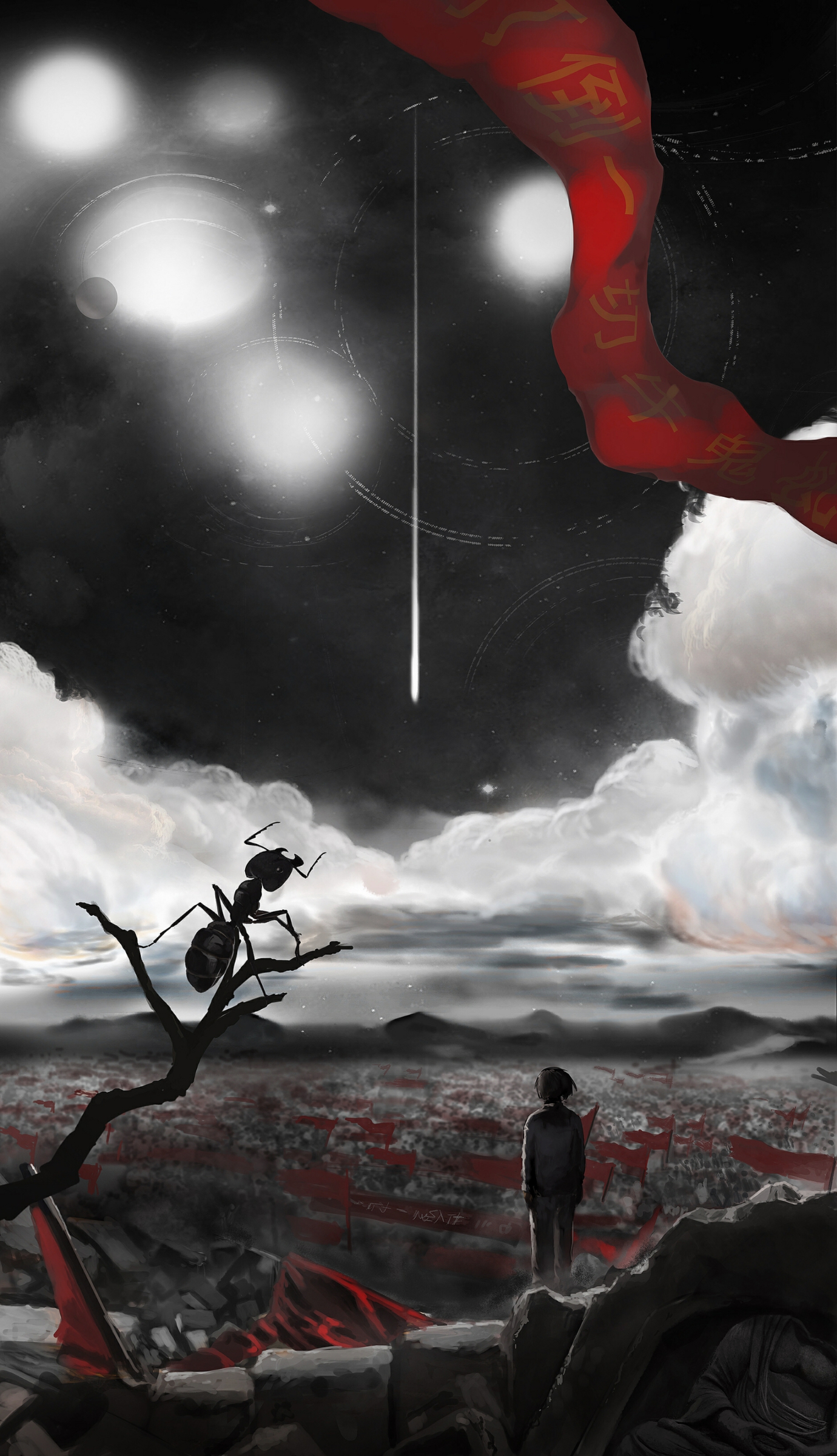 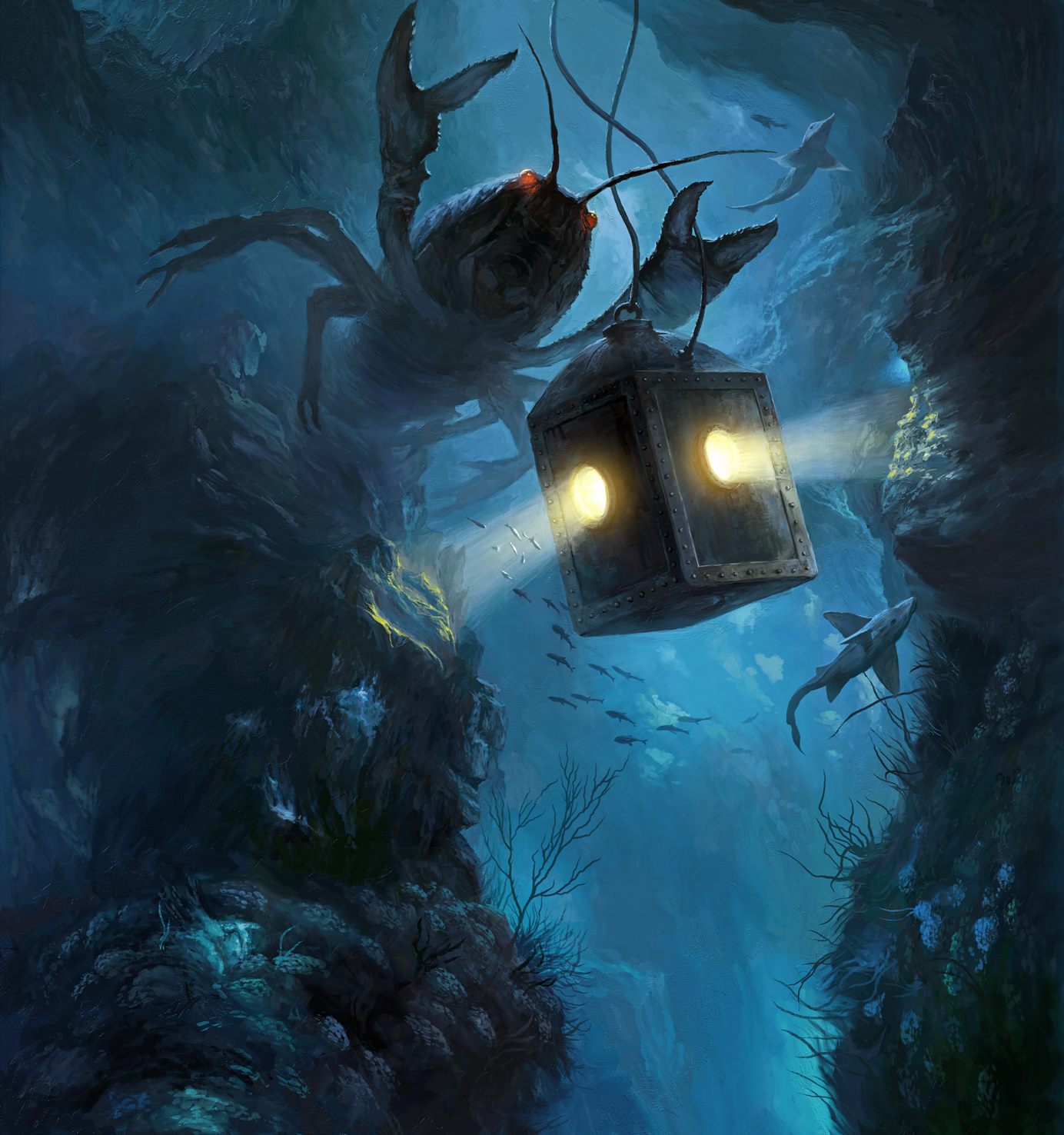 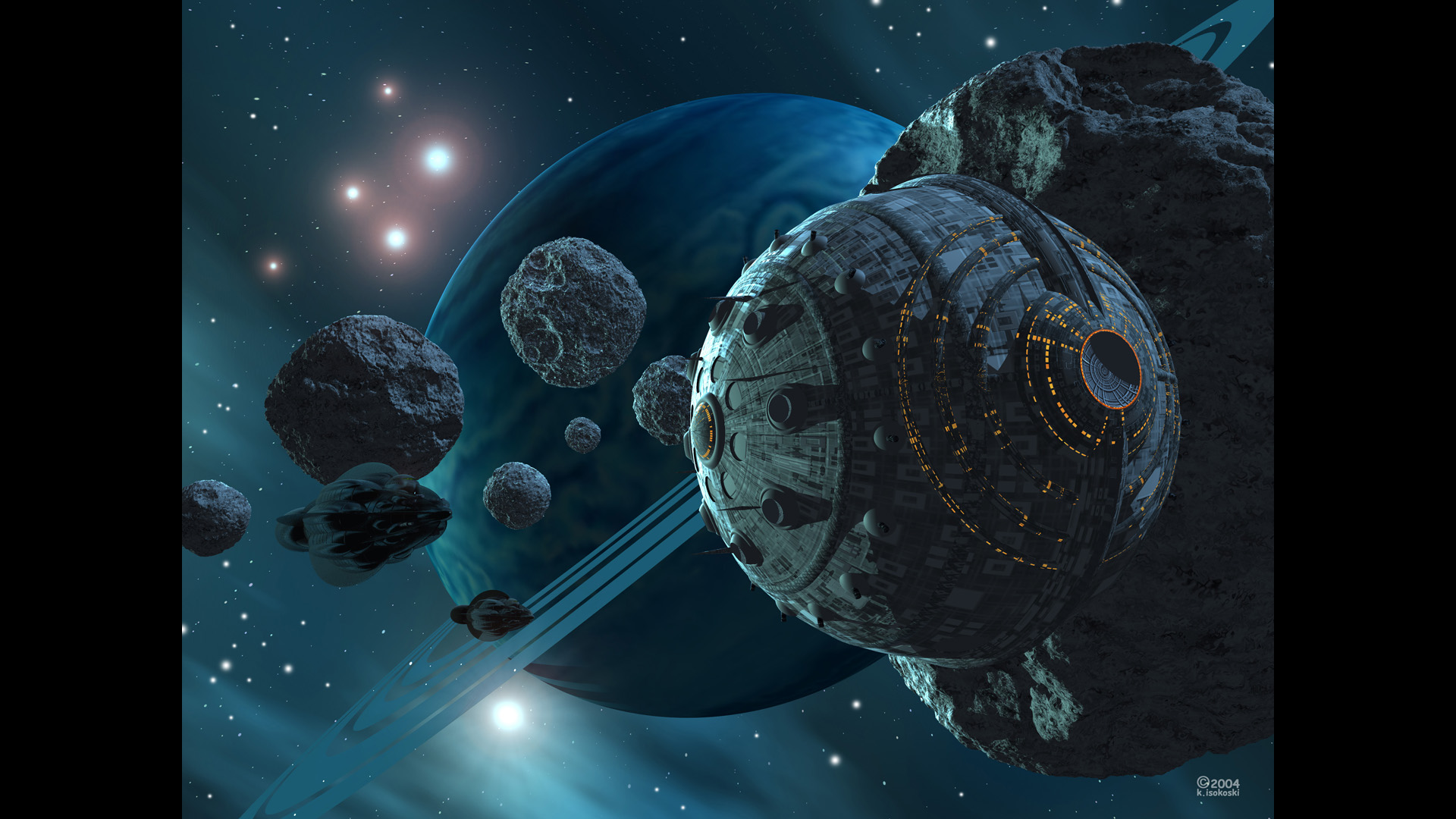 Howard “howeird” Stateman is a former photojournalist in Washington and Oregon, USA and served in the US Peace Corps in Thailand as a photographer for the ministries of education and agriculture. He has exhibited at NASA’s ContactCon, Baycon, Denvention and Renovation worldcons. He currently lives in California and feeds his photo habit by chasing electrons in Silicon Valley. 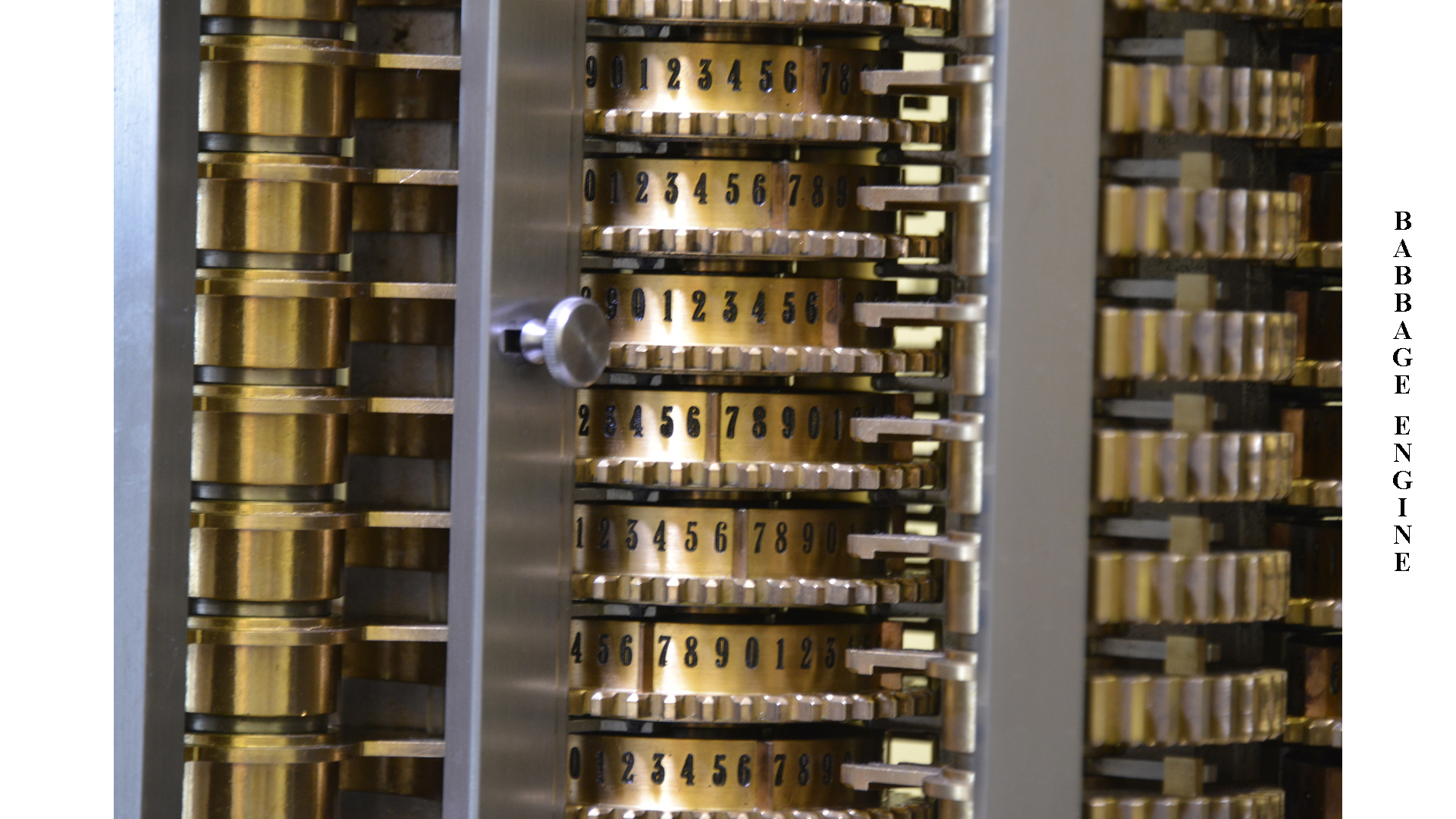 I AM HENRY I’m a photographer and a visualist that enjoy freezing or playing with time in order to get something exceptional. The way I achieve my visual goal is completed with talent and experience. What is best in life? To be able to do things with great people and have fun doing things then you’ll achieve greatness in all areas of life. I’ll make it happen and keep it simple, silly. 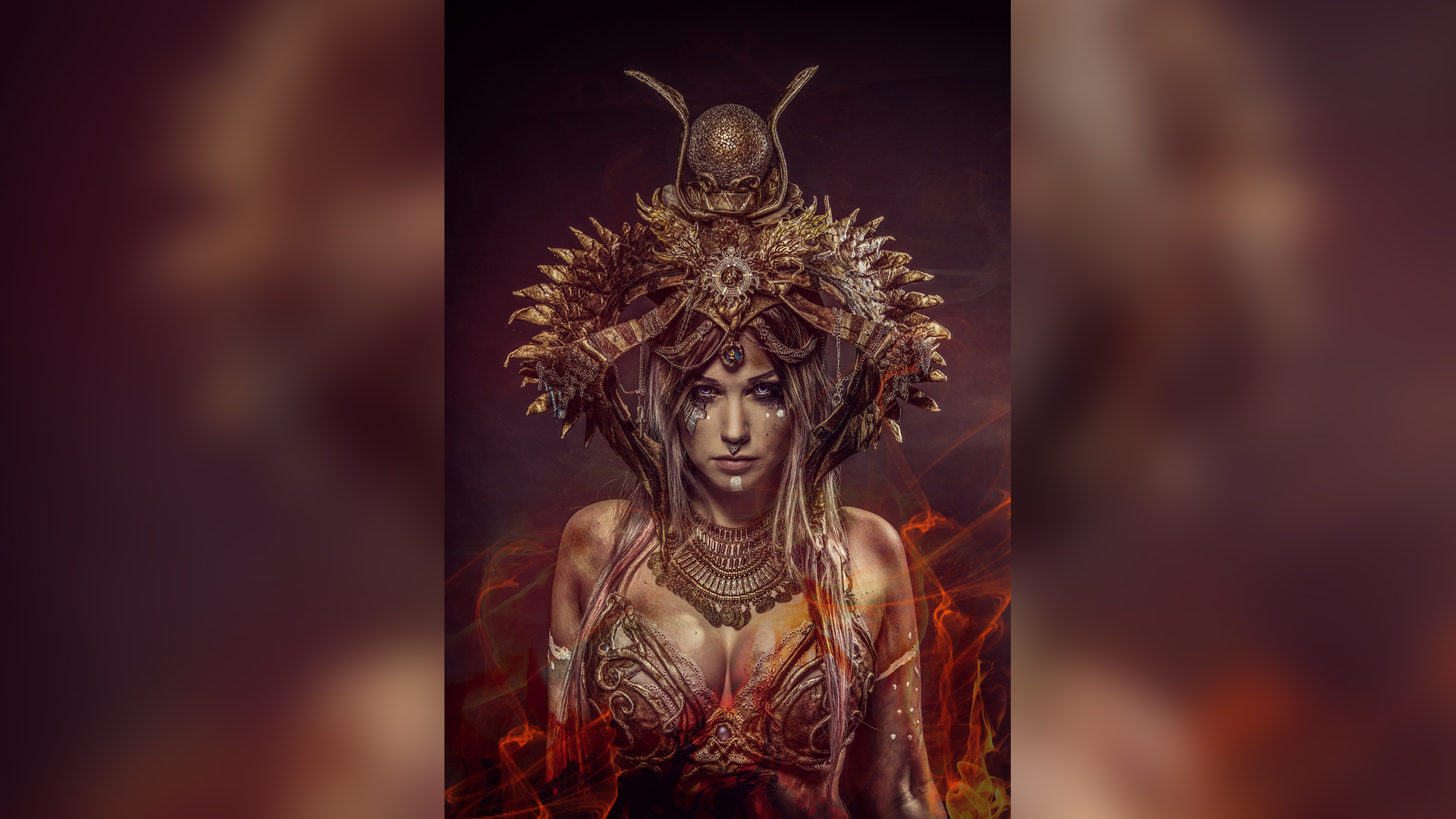